Here is a neat little trick for your debugging toolbox.

Most of us have done “debugging by printing to console”. I know my PHP code was often littered with echo statements during development, my Java code sometimes needed to be ridded of System.out.println calls before committing it to CVS, and even now I sometimes use NSLog for debugging weird concurrency problems.

With Xcode, there is a better way to log out text markers (“made it here!”) and values (“content offset: (0.0, 88.0)”). Create a breakpoint, choose Log Message or Debugger Command, specify what you’re interested in, and let Xcode Automatically continue after evaluating.

For example, with the Log Message breakpoint action you could type:

With the Debugger Command breakpoint action, you could use:

During development, this is much better than NSLog calls. It doesn’t clutter your code, you can disable the logging individually and temporarily, and you can modify the log output without recompiling.

Let there be sound

Sometimes, though, this logging approach isn’t optimal. Say you’re debugging a custom caching solution and you’re interested in when the cache misses happen. The classic approach: 1.) use the app, 2.) log out the cache misses, 3.) piece together ex post facto the cache faults with the actions that triggered them (or divide your focus between the simulator/device and the logging console).

I have found that in this case it is much more useful to use another of the Breakpoint Actions called Sound. It lets you play a short sound (Ping, Tink, Pop, …). In combination with “Automatically continue after evaluating”, this means that I can use the app and get the debugging info in realtime, without having to switch my focus.

I most recently used this for debugging a problem while using the built-in UIActivityViewController. I had relied on the assumption that presenting and dismissing of the mail/tweet compose screens would call the appropriate view appearance methods on my presenting view controller. Strangely this was not the case (-viewWillDisappear: is not called). I was key-value-observing a subview and thus did not symmetrically remove the view controller as an observer, so the app crashed. 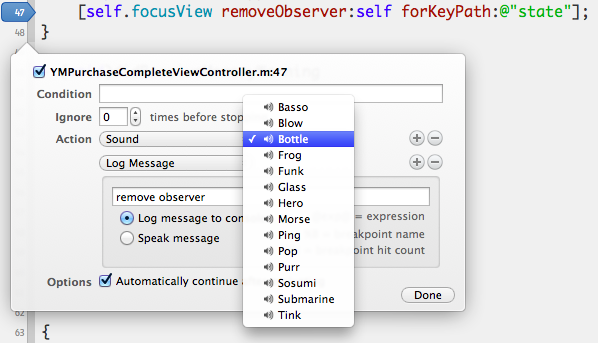 So I had my breakpoints play a “Ping” sound whenever the view controller added itself as an observer, and a *plop* sound (“Bottle”) whenever it removed itself. In the end, I could hear whether I had exactly one *plop* for a *ping*.